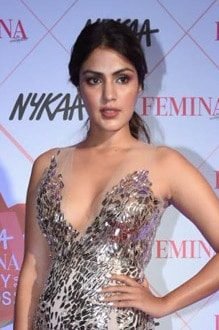 Rhea Chakraborty knows the name of Riya chakravarthi. Rhea Chakraborty is highlighted name in Sushant case. Her father was an Indian army officer. She is Model, actor and VJ. She started her career as a VJ in MTV. She has done Hindi and Telugu movie. Before movie she is a participant in TVS scooty Teen Diva in 2009 and host a show Pepsi MTV Wassap in 2010. Aditya Roy Kapur, this name is added with Rhea Chakraborty as a boyfriend (Rumoured). She is famous for being girlfriend of late Sushant Singh Rajpoot.

Rhea Chakraborty was born in a Bengali family in Bangalore 1st July 1992 Wednesday; she is 28 year old as in 2020.

She has a younger brother named Showik Chakraborty.  She did his education from Army public school of Ambala Cantt.

Physical appearance and her favourite things

Her height is 1.66 meter, Eye colour is dark brown and hair colour is Black. She looks very beautiful in all type dress either Western or Indian outfit.  Rose water Spray from forest essential her favourite fragrances.

She loves to eat sea food but she eats healthy food to maintain his physic. Also she daily practice yoga to maintain her lifestyle.  Once She was asked about her beauty secret She replied”I use lots of Coconut oil, I drink it, I apply it on my face and i can’t emphasise it enough”

In 2009, Rhea started her career as contestant with MTV India’s TVS Scooty Teen Diva and selected first runner up. She joined MTV as a VJ and hosted Pepsi MTV Wassup, MTV Gone in 60 Seconds and Tic Tac College Beat.

After MTV Rhea get chance in Bollwbood and Telugu movies. First time she did a Telugu movie name Tuneega Tuneega. In this Telugu movie she played good role of Nidhi. After this movie she got a chance in Hindi movie that is Mere Dad ki Maruti as Jasleen in 2013. In 2014 she played a loose character of Sonali in Sonali Cable. After 2 years, in 2017 she again appeared in Bollwbood movie Bank Chore played character of Gayatri Ganguli, Half Girlfriend as Anshika, Dobara: See your evil as Tanya. Rhea won the nomination for Zee Cine award and Bet Debut in Apsara Award.

In 2018, she was trolled on posted Two picture with famous Bollywood director Mahesh bhatt and people are comparing her with Anup Jalota and Jasleen Mathura’s Joidi.

After the death of Sushant Singh Rajpoot, his father K.K. Singh filed a FIR against Rhea on 28th July in 2020 at the Rajiv Nagar police station in Patna. His father alleged that Sushant was fully pessession of Rhea and she had full control of Sushant finance and credit card. In the FIR his father complained that ”Sushant called his sister and and told her that Rhea was forcing him to show dr. receipt to media and would prove him Mad. Thereafter, no person give him work. On 8th June night, sushant’s secretary Disha committed suicide. She was appointed by Rhea as Shusant secretary. After Disha suicide, Rhea blocked Sushant phone number. Sushant was afraid Rhea could have made him responsible of Disha’s suicide as she had threatened to frame him in the secretary’s suicide case.”  After the FIR, 4 member of Patna Police team left for Mumbai to  ask inquiry to Rhea and her family.