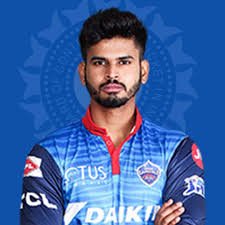 Shreyas Iyer is a professional cricketer who represents India at the international level.  Iyer was born on 6 December 1994 in Mumbai, Maharashtra, India. Iyer did his schooling from Don Bosco High School in Mumbai. Shreyas Iyer is a big fan of non-vegetarian food. Swimming, football, tennis and golf are the hobbies of the Mumbai-based batsman. Shreyas Iyer’s favorite cricketer is Abraham Benjamin de Villiers, who is a former South Africa batsman. Roger Federer, the 20-time major winner, is Iyer’s inspiration from the field of tennis. He is a huge-huge fan of football and loves to watch some modern-day football giants like Cristiano Ronaldo, Andrea Pirlo, Eden Hazard and Zlatan Ibrahimovic. Shreyas is a big fan of South Indian dishes. Sambar, Rasam, Potato curry, Pappadum and Pani Puri are his first-line picks.

Eminem, Michael Jackson and Lil Wayne make Shreyas musically motivated to perform in a great manner for India. Deepika Padukone, Scarlett Johansson and Jessica Alba are Iyer’s picks from the world of cinema. His favourite music band is Linkin Park, one of the best rock bards ever.

Ajab Prem Ki Ghazab Kahani’s ‘Tera Hone Laga Hoon’ is his beloved song. Tom and Jerry attracted his childhood a lot. Shreyas Iyer likes Ferrari’s luxury sports cars more than any other brand. Bombay Bridgford in Nottingham (England) is his most-trusted restaurant. Shreyas is a huge animal lover and does many great things to make this world a better place for all. One can see many dogs around his home in Mumbai. His favourite superhero is Superman.

Pravin Amre is Shreyas’ guru who made him look world class from the great Chhatrapati Shivaji Maharaj Park. Pravin Amre’s watchful eyes has made Shreyas one of the best players of the IPL and holds every single chance to take his game to another stage at the international level. At the age of 12, Amre started to make a modern-day product for India. Shreyas’ aggressive batting style attracted many in his younger days. He was also compared with the legendry batsman Virender Sehwag.

24-year-old Shreyas Iyer is the captain of the Delhi Capitals in the Indian Premier League (IPL). Shreyas has represented India in One Day International (ODI) and Twenty20 International (T20I) formats. He is desperately waiting to wear the white jersey of Test cricket as his first-class career is promoting his way to the five-day format in a bigger and better manner. In 54 first-class matches, he has scored 4,592 runs. Iyer made his ODI debut against Sri Lanka in Dharamshala in December 2017.

Against New Zealand in Delhi in November 2017, he played his first T20I match. Many cricket pundits rate him very high and see his future in India’s middle-order for a long time. Even for the 2023 ICC Cricket World Cup, which will be hosted by India, Shreyas Iyer can play a great role for captain Virat Kolhi. In 2018, after Gautam Gambhir’s poor bating touch, the management of the Delhi Capitals decided to invest their future in Iyer as they see him helping the Delhi Capitals to their very first IPL glory. His leadership skills in the IPL have made his game better in terms of getting the best from the most dangerous situations. As in the modern-day cricket, the IPL can be a fabulous way to learn in many different ways for any professional cricketer.

Is Aalyah Gutierrez Starting Her Wrestling Career? Know all About Her