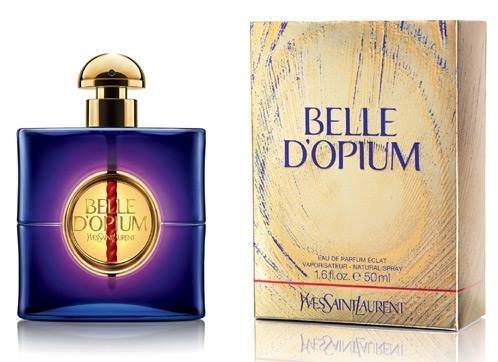 Sensational cult classic, exotic oriental spicy masterpiece “Opium” , created by perfumers (Jean Amic and Jean-Louis Sieuzac) for the House Yves Sain Laurent in 1977 and won the fame of one of the most coveted fragrances in the history of women’s perfumes, 33 years later the next reincarnation. Perfume Belle d’Opium (Beautiful Drug) is the “new generation” of the legendary fragrance, the elegant passion and warm sensuality of which is dedicated to a modern young woman. Easier and playful oriental pattern Belle de Opium, reminds of the mythical Chinese dragon, embroidered on the seductive silk with delicate gentle threads. It conceals power and power, mystery, contrasting effectively with modern femininity and sexuality.

The authors of the soft and deep east-flower harmony of Belle D’Opium were the famous perfumers Honorine Blanc and Alberto Morillas from Firmenich. According to the developers, work on the composition continued for four years, “The composition of YSL Bell Opium filled with the necessary magic, each ingredient was waiting for its best embodiment.” Elegant, slightly unpredictable, competently balanced by fragrant choreographer’s composition as if striving to comprehend perfection.

A sensual, slightly spicy white bouquet of elegant Casablanca lilies and exquisite refreshing notes of gardenia, adorned with fine mandarin bitterness, is full of the desire to stun from the first minutes and to attract the attention of “spectators” to their passionate nature. The intense intoxicating aroma of a fruit hookah, seasoned with a hot chord of white pepper and gentle notes of jasmine, permeates the “heart” of the composition of YSL Belle d’Opium, creating a luxurious aura of femininity and sexuality. The soft deep shades of earthy patchouli, the resinous incense of incense and the sweet seductiveness of amber notes, encrusting the rich wood chord of sandalwood, create a young and modern eastern harmony at the base of the Belle de Opium pyramid.

The design of the Belle Opium bottle, with the exception of the color scheme, copies the forms created by Fabien Baron and the chief designer of the YSL House Stefano Pilati in 2009 for the reissue of the classic Opium. In place of the original red-brown color came the “electric” shade of indigo. Through the golden disc with the name of the fragrance, a curled tube of the sprayer is visible, from which a magical ruby ​​pulsation proceeds. Completeness of a luxurious sculptural composition gives a domed cap of gold color.

Marketers of the company Yves Saint Laurent have long been not afraid to shock the public by advertising their perfumery products in a provocative, scandalous vestment. How can I not remember the advertisement created in 2000 (photographer Steven Meisel) for Opium with a nude model Sophie Dahl or advertisement for the flavors M7, Paris. The angry outcry of some people and the last zepreti only spur the interest of the rest of the less “prim” public.

A striking example was the ambitious television advertisement Yves Saint Laurent Belle Opium, filmed by French director RomainGavras (RomainGavras) . The video was banned for display in the UK by the ASA Association (which exercises moral control over advertising) after considering complaints of 13 Englishmen as “drugged with drugs”. The reason was the ambiguous gesture of the main character (she runs her finger through the veins from the inside of the arm from elbow to wrist) and her passionate dance, according to ASA, depicting the reception and impact of drugs.

On the other hand, a minute ad in the language of the body embodies the whole attraction of the woman Belle d’Opium . Seductive and bewitching, imbued with mystical vibes and symbolism, Oriental dance in a luxurious setting by the eminent English choreographer Akram Khan is a modern Salome dance performed by a young French actress and model known for the film “Princess de Montpensier” (2010) by Melanie Thierry (Melanie Thierry) . To perform this incendiary and incredibly sensual dance the girl had to train for a month for several hours a day. As the final chord of a beautiful action, the words “I’m your addiction, I’m Belle D’Opium.” A new fragrance from Yves St Laurent. “

Perfume “Belle Opium” brand Yves Saint Laurent, possessing a powerful, complex and very magnetic sound, perfectly suited for the autumn-winter season. A perfect evening and club perfume that can draw admiring glances of men to the woman Belle d’Opium – a woman seducer, a woman full of secrets and contrasts.

The fragrance went on sale in a concentration of eau de parfum in bottles of 30, 50 and 90 ml.

Loose Diamonds Can Be Used For Purposes Other Than Jewelry